NSA spying on Petrobras, if proven, is industrial espionage: Roussef 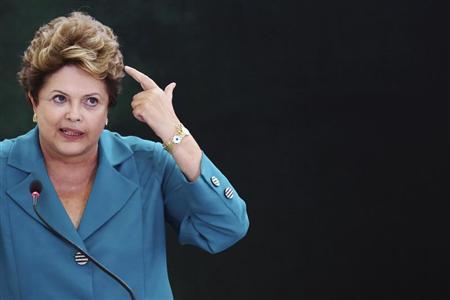 (Reuters) – Reports that the United States spied on Brazilian oil company Petrobras, if proven, would be tantamount to industrial espionage and have no security justification, Brazil’s President Dilma Rousseff said on Monday.
Brazil’s Globo television network reported on Sunday that the U.S. National Security Agency hacked into the computer networks of Petrobras and other companies, including Google Inc., citing documents leaked by former NSA contractor Edward Snowden.

The report came as Brazil is preparing to auction rights to tap some of the largest oil finds in the world in recent decades, deposits trapped under a salt layer off its Atlantic coast. State-run Petrobras, Brazil’s largest company and a source of national pride, made the discoveries in recent years and will be a mandatory partner in developing all of the new deep-sea fields.
The Globo report added tension to relations between Washington and Brasilia already strained by previous disclosures of NSA spying on internet communications in Brazil, including email messages and phone calls of Rousseff herself.

An angry Rousseff has repeatedly demanded an explanation. At stake is a state visit by Rousseff to the White House on October 23 to meet President Barack Obama and discuss a possible $4 billion jet fighter deal, cooperation on oil and biofuels technology, as well as other commercial agreements.

“If the facts reported by the press are confirmed, it will be evident that the motive for the spying attempts is not security or the war on terrorism but strategic economic interests,” Rousseff said in a statement.

The U.S. government has said the secret internet surveillance programs disclosed by Snowden in June are aimed at monitoring suspected terrorist activity and do look at the content of private messages or phone calls.
PETROBAS NOT A SECURITY THREAT

“Clearly, Petrobras is not a threat to the security of any country,” Rousseff said, adding that the company is one of the world’s largest oil assets and belongs to the Brazilian people.

Brazil will take steps to protect itself, its government and its companies, Rousseff said, without elaborating. She said such espionage and interception of data were illegal and had no place in the relations between two democratic nations.

On Friday, Obama met with Rousseff during a summit of leaders of the world’s largest economies in St. Petersburg, Russia, and pledged to look into the reports that the NSA had snooped on her personal communications and those of Mexican President Enrique Pena Nieto when he was still a candidate.

She said Obama had promised her a reply by Wednesday.
Brazilian Foreign Minister Luiz Alberto Figueiredo is scheduled to meet in Washington on the same day with Obama’s national security adviser Susan Rice, Brazilian officials said.

Globo did not say when the alleged spying took place, what data might have been gathered or what exactly the NSA may have been seeking. The television report showed slides from an NSA presentation, dated May 2012, that it said was used to show new agents how to spy on private computer networks.

In addition to Google and Petrobras the presentation suggested the NSA had tapped into systems operated by France’s foreign ministry and the Society for Worldwide Interbank Financial Telecommunication, an international bank cooperative known as Swift through which many cross-border financial transactions take place.

Brazilian officials said the spying report would not affect the upcoming auction of rights to extract oil from the giant Libra oil field, which will go ahead as scheduled on October 21.

Some Brazilian politicians have suggested that U.S. companies should be excluded from the bidding, but experts said that is legally impossible according to the terms of the auction.

Libra has estimated reserves of between 8 and 12 billion barrels of oil, according to Brazilian oil regulator ANP.

Brazil is counting on the new oil production to consolidate its emergence as a world economic power and take the country’s development to a new level. Rousseff signed a law on Monday that designates the royalties from the new oil production contracts for health and education programs.
(Reporting by Anthony Boadle; Editing by Reese Ewing and Christopher Wilson)