‘It’s not okay that people steal our secrets’

One of the least expected companies to take collateral damage in the epic Sony Pictures hack has been Snapchat. CEO Evan Spiegel regularly trades emails with Sony Pictures CEO Michael Lynton, who sits on Snapchat’s board, and the revelations from the pair’s emails have been spilling out all week. Among them: the company secretly bought a company that makes a Google Glass-like product; it’s actively pursuing plans to insert music into the app; and the company turned down a bigger offer from Facebook than the $3 billion originally reported. But there are other revelations in there, too: that Chinese internet company Tencent felt insulted by him during fundraising negotiations, for example, and that he and his co-founder sought to take $40 million for themselves during a fundraising round.

“WE’RE GOING TO CHANGE THE WORLD BECAUSE THIS IS NOT THE ONE WE WANT TO LIVE IN.”

Spiegel said the revelations have been personally upsetting — “I felt like I was going to cry all morning,” he says. But he said that after giving everyone on his team some time to be upset, that everyone would “keep doing exactly what we were doing. And then we’re going to do it 10 times better.” He concluded on a bittersweet note: “We’re going to change the world because this is not the one we want to live in.”

Spiegel’s full note is below. 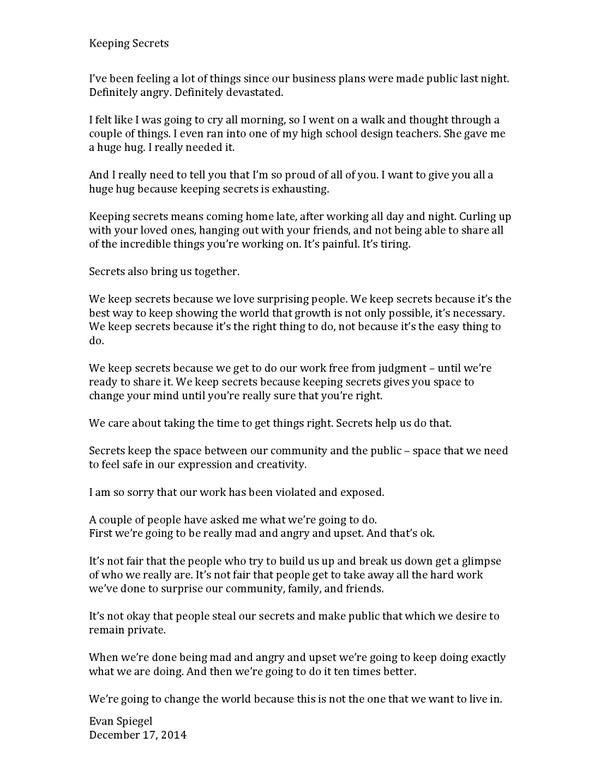